Counter Strike: Global Offensive (CS:GO) is a multiplayer first-person shooter video game developed by Hidden Path Entertainment, that has quickly become a mainstay on the eSports scene. As the fourth game in the Counter-Strike series, released back in 2012, the game pits two teams against each other, the terrorists and counter-terrorists. By the time the fourth version of the game was released, its creators had turned it into a full-fledged game, with Counter Strike: Global Offensive now played by millions.

With six game modes in total, CS:GO has proven to be a huge hit with gamers, both in the playing and gambling markets. Major events, including the DreamHack Masters and ESL Pro League now attract audiences of millions from different regions throughout the world, with last 2016’s World Electronic Sports games offering a total prize pool of $1.5 million. With teams such as FaZe Gaming and SK Gaming regularly battling it out for the top CS:GO prizes, betting markets have seen huge growth, with any number of bookmakers now offering bets on matches. In this piece, we will provide readers with a much clearer understanding of the game, as well as how and where you can bet on CS:GO matches.

What is Counter Strike CS:GO Betting?

Counter Strike: Global Offensive is now one of the leading eSports games around, having grown significantly over recent years thanks to its variety. As a result, it comes as little surprise that bookmakers have been just as quick to notice the potential of the game in terms of betting markets, which has helped to revolutionise the industry. Whether you are a CS:GO player yourself or not, the opportunity to both place and win real money bets is something not to pass up on. Even if this is the first time you are hearing about the game, if that is possible, there are now a whole host of platforms for you to choose from, and with our help, you can quickly find yourself in a position to add to your bank balance. Although the amount of markets and types of bet available will depend on the bookmaker, stature of the CS:GO event and teams participating, favourite markets to date include the ESL One and ELEAGUE Major, where teams such as Fnatic and Astralis have come out on top in the past. With over 250,000 eSports fans tuning in to such events, betting on CS:GO is only set to increase.

Where to Bet On Counter Strike CS:GO

There are now numerous online bookmakers battling it out in order to secure the services of new CS:GO customers, in the shape of traditional sportsbooks and modern eSports dedicated sites. With all being fully licensed throughout most regions, it can be extremely difficult selecting the right platform to suit your CS:GO betting needs. With the likes of Betway, Ladbrokes, William Hill and Ladbrokes all having different advantages and disadvantages surrounding their services and features, it is important to spend some time researching this area. With markets, bonuses and promotions, odds and live streaming all potentially swaying your final selection, our operator reviews can provide a helping hand here. Especially given the fact that many choose to focus more upon the likes of League of Legends and Dota 2, given their standing within the industry, you will want to ensure that your bookmaker provides enough CS:GO opportunities on a regular basis. Due to the nature of the game, betting markets within Counter Strike: Global Offensive tend to focus mainly around the team/player aspect of the game. This means that a whole host of outright betting markets are available, where you can be on the winner of individual matches and tournaments. Meanwhile, during extended tournaments, such as ESL Pro League and Intel Extreme Masters, which contain both group and knockout stages, the opportunity to back teams to make it to a certain stage of the event will often arise at many bookmakers. You can even bet on the success on certain regions or nations, for example backing a European team to win the StarLadder i-League Star Series. Given the way in which the CS:GO world rankings currently look, with the top 10 made up of European, American and Brazilian teams, this is often a market in which attractive odds can be found.

Handicap betting within CS:GO is becoming increasingly popular, which is often utilised in order to counter a perceived bias in ability between two teams. As a result, bookmakers offer a handicap of points/maps in order to level the playing field, as well as making it more exciting for customers. These points or maps are added to the game’s final score, with the winner then determined. Taking advantage of such a bet within CS:GO is best carried out during a best-of-three series, with any potential overtime also being taken into consideration. For example, backing Cloud9 at -1 means that they will need to win by 2 clear points or maps in order for your bet to come in. For those looking to gain a better understanding of the game, Pistol Rounds are undoubtedly one of the most important aspects of CS:GO. Teams that come out on top during pistol rounds are at a major advantage when it comes to the latter stages of matches, with the first team to win 16 rounds winning the overall battle. By winning both pistol rounds, CS:GO teams can quickly find themselves 6-0 up in a match, which is pretty tricky to recover from. So, as you are potentially backing teams such as SK Gaming and Fnatic with your hard-earned cash, understanding this area of the game is key. Pistol Rounds are notorious for their unpredictability, with many bookmakers two bets during this period.

Counter Strike CS:GO Teams you can bet on

Despite Swedish players generally dominating the competitive CS:GO scene, reportedly earning almost 50% of all winnings in recent years, the gap between the top teams is relatively little. Although betting on the world’s best CS:GO teams is unlikely to earn you substantial amounts in the short-term, in the long-run it is definitely a clever strategy to adopt. At the time of writing, the Counter Strike: Global Offensive rankings look like this: 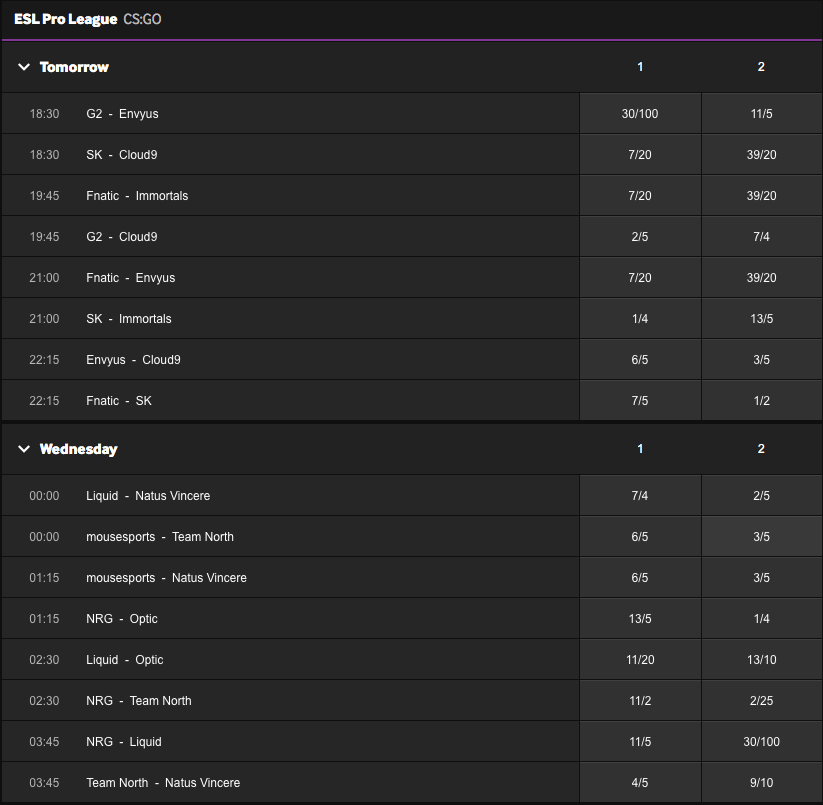 As with a large amount of eSports titles, Counter Strike: Global Offensive receives a huge amount of attention during DreamHack events, which attracts gamers from across the globe. Despite this, tournaments are available at all stages of the year, with the ESL ESEA Pro League, Counter Pit League and CEVO Professional among the most exciting. Despite CS:GO events still substantially behind both Dota 2 and League of Legends when it comes to prize pools, the World Electronic Games, ELEAGUE Major, Esports Championship Series and MLG Major Championship all offer prize money of over $1 million, with the potential for punters to get involved on the action increasing all the time.

Whether you consider yourself a seasoned professional when it comes to CS:GO or a relative rookie, taking some important factors into account before placing a bet can often prove to be the difference between winning and losing. With potentially so many factors combining to determine the winner of a Counter Strike: Global Offensive match, take a look at these betting tips before making your selections:

Here we will provide answers to some of the most commonly asked questions when it comes to Counter Strike: Global Offensive betting, surrounding rules and regulations, betting platforms and CS:GO markets.

What is Counter Strike CS:GO Betting?

Many of the major bookmakers have now introduced Counter Strike: Global Offensive markets onto their sportsbooks, with a wide range of tournaments and events available to bet upon. As with more traditional sports markets, customers are free to bet on teams to win outright matches and tournaments, as well as handicap betting, group betting and teams to reach the final.

Where Can I Bet on Counter Strike CS:GO?

There is now a whole host of bookmakers to choose from when looking to begin placing CS:GO bets, from traditional bookmakers, to modern dedicated eSports sites. Many platforms will offer welcome bonuses in a bid to attract you, however it is also important to look into the odds, markets and customer service provided too. You can view our operator reviews for more information regarding this.

Which Tournaments Are Available to Bet On?

From major events such as the ESL One, DreamHack Masters and CS Summit, to more recent additions to the CS:GO calendar, including the iBUYPOWER Masters and European Minor Championships, the tournaments covered by bookmakers varies. However, given the amount of action throughout the year, you will rarely be short of CS:GO action to bet on.

Bet Now on CS:GO at Betspawn