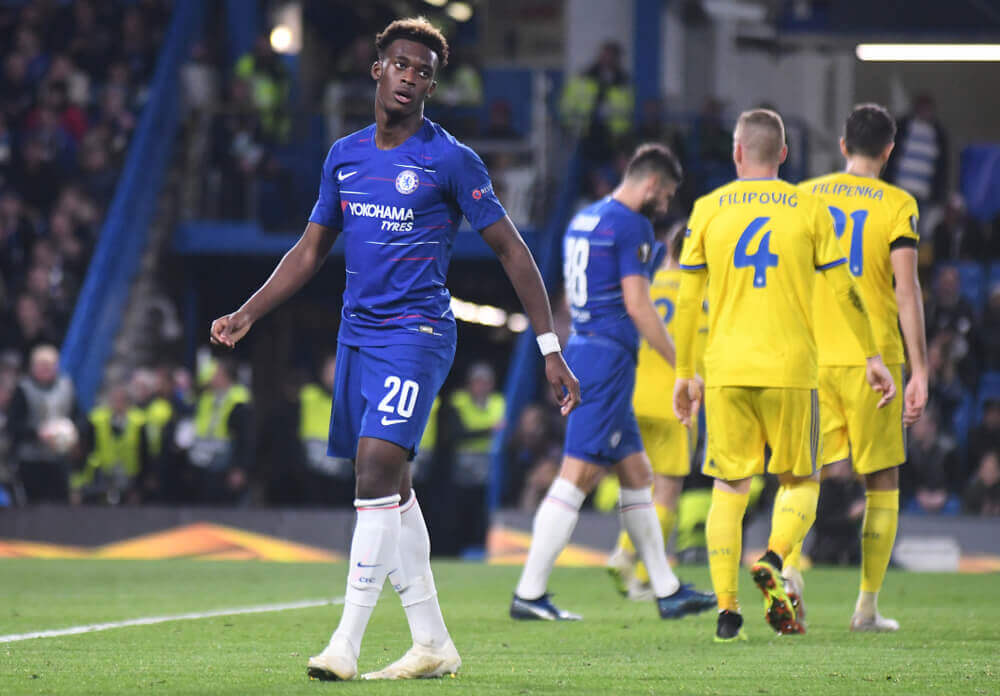 There were strong rumours in the January transfer window of a possible move for Callum Hudson-Odoi from Chelsea to Bayern Munich.  With Jadon Sancho enjoying a great season in the Bundesliga for Borussia Dortmund plus Reiss Nelson and Rabbi Matondo opting to join German clubs, Hudson-Odoi would have been following in the footsteps of young British talent.

However, the move to the Bundesliga champions was blocked by Chelsea, despite the club receiving a large bid for the player.  It wasn’t as if Bayern Munich were trying to get the player because he was available cheaply, they bid a sizeable amount for the young English winger but the deal was blocked by the Blues.

Having rejected an increased bid from Bayern Munich, it was thought Hudson-Odoi would be handed the chance he has been waiting for in the first team.  Were Chelsea about to unleash the skilful forward on the Premier League?

The answer was a resounding no and since the potential move to Bayern Munich was blocked, Hudson-Odoi has failed to make a starting appearance in the Premier League.  The 18-year-old has been brought on from the bench but with little time remaining, which is very disappointing.

The England under-19 international did not start the match at Malmo in the UEFA Europa League Round of 32, appearing for just 6 minutes at the end of the game.

During the recent 2-0 loss at the hands of Manchester United in the FA Cup, the game was crying out for an injection of forward thrust for Chelsea.  Instead of bringing on Hudson-Odoi to try and do something different, Maurizio Sarri opted to make like-for-like changes and the Englishman remained on the bench.

A photo emerged from that game showing Hudson Odoi looking across at Sarri with the kind of stare you reserve for your worst enemy.  While a player should never undermine the manager, it must be difficult not to let your anger spill out when you are not being used.  Sarri opted to bring on Davide Zappacosta, a defensive player, as a substitute instead of Hudson-Odoi when Chelsea needed goals and it was very a strange decision.

The more Hudson-Odoi is left out during the remainder of the season the more likely it is he is going to make a move in the summer transfer window.

With Arjen Robben and Franck Ribery coming to the end of their time at Bayern Munich, Hudson-Odoi appears to be their number one target as a replacement.  BetVictor offer 4/1 for Hudson-Odoi to move to Bayern Munich in the summer.

If Hudson-Odoi’s game time does not increase by the end of the season, it will be interesting to see if Chelsea can hold on to him.