Widely known as one of the most competitive leagues in the whole of football, the 18/19 Championship season is expected to be one of the most entertaining and unpredictable in recent years, with many teams having invested heavily in the summer transfer window in an attempt to ensure that they are well equipped to deal with their 46 matches. With Wolves, Cardiff City and Fulham having all gained promotion to the top-flight last season, who will be the standout teams this time around? Elsewhere, which clubs will be left sweating at the wrong end of the table?

The new campaign gets underway on Friday 3rd August, when Reading host Derby County, with fans across the UK counting down the days already. The likes of Stoke City and West Bromwich Albion are already being lined up as the bookies favourites for promotion, however things are never as expected in the Championship, meaning that there are likely to be some unlikely candidates come the last few weeks of the season. Could the eccentric Marcelo Bielsa guide Leeds United to a revival? Or will the likes of Aston Villa and Middlesbrough return to the Premier League?

The Best Betting Tips for the Championship

We will be providing betting tips on all major Championship fixtures, perfect for those looking to gain a helping hand on their way to beating the bookmakers. Our tips also offer nothing but the best odds around, as well as promotions from major betting platforms. Our football experts take everything into account too, with everything from form and team news to head-to-head records and motivation analysed pre-match. Carrying out such research only adds to your chances of success being heightened.

Meanwhile, despite usually focusing on the main betting markets available, we do sometimes back more diverse options, whether it be a draw no bet or double chance market. Meanwhile, when there is an overwhelming favourite for a particular match, betting options including handicaps and over/under goals are also well worth considering.

Now its time to take a closer look at the teams involved in the English second tier this season, including the managers in charge of such clubs, along with the standout player to keep an eye on. Their position in last season’s standings will also potentially provide a good indication of their chances this time around, however with teams having joined from both the Premier League and League One also, predictions are certainly not straightforward.

There have been plenty of changes to both managers and playing squads over the summer, with the likes of Graham Potter and Marceloa Bielsa having joined Swansea City and Leeds United respectively, as the duo prepare to take on the rest of the Championship field for the first time in their careers. Elsewhere, the likes of Tony Pulis, Steve McClaren and Steve Bruce all have vast amount of experience in the English game, but will this be enough to see their clubs shine?

A total of 24 teams helps to make up the Championship, meaning that each team will play 46 games throughout the season, with their points total and goal difference determining the position in which they will eventually finish. The top two teams in the table come the end of the regular season will automatically be promoted to the Premier League, while the teams placed in 3rd-6th will battle it out in the season ending playoffs, with the playoff final revealing the third and final team to gain promotion to the top-flight. Meanwhile, the bottom three teams will all be relegated to League One, something in which all clubs will be hoping to avoid. With no winter beak scheduled until the 19/20 campaign, the Championship season will run from August through till May, with teams often playing as many as three times in just seven days.

As previously mentioned, many clubs have been extremely active in the summer transfer window, with a whole host of deals meaning that many teams will have a new look to them this season. Let’s take a look at the top transfers completed by Championship clubs, with such players potentially having a great impact in the second tier of English football.

Despite the likes of Newcastle United and Wolves having moved into the Premier League over recent times, there are still some hugely impressive and vast stadiums hosting matches in the Championship this season, which help to create some of the best atmospheres around. Let’s take a closer look at all of the venues involved this time around.

Aston Villa currently have the biggest stadium capacity at 42,682, while with a maximum capacity of just over 12,000, Championship newcomers Rotherham United are unable to compete with some of their larger rivals in this area:

As well as the ability to bet on individual Championship matches, punters now have the opportunity to back their favourite team to either win the title or gain promotion, along with a range of other markets. Let’s take a look at the odds before the season gets underway, which are provided by Betway. 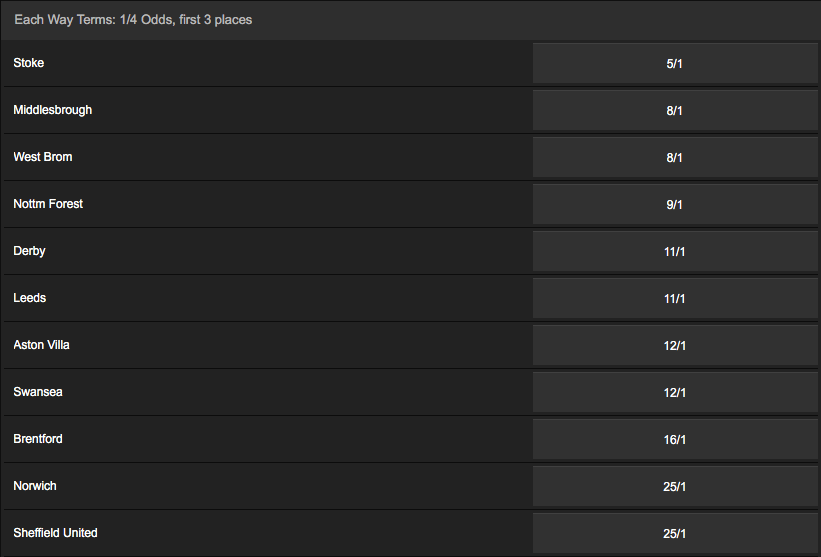 It perhaps comes as little surprise that the likes of Stoke City and West Brom are among the favourites for promotion, with the duo having been relegated from the Premier League last season. The duo both possess playing squads full of talent, with managers such as Gary Rowett and Darren Moore both looking to add to their increasing reputations in the English game. Elsewhere, having lost in the playoffs last time around, both Aston Villa and Middlesbrough are good outside bets. 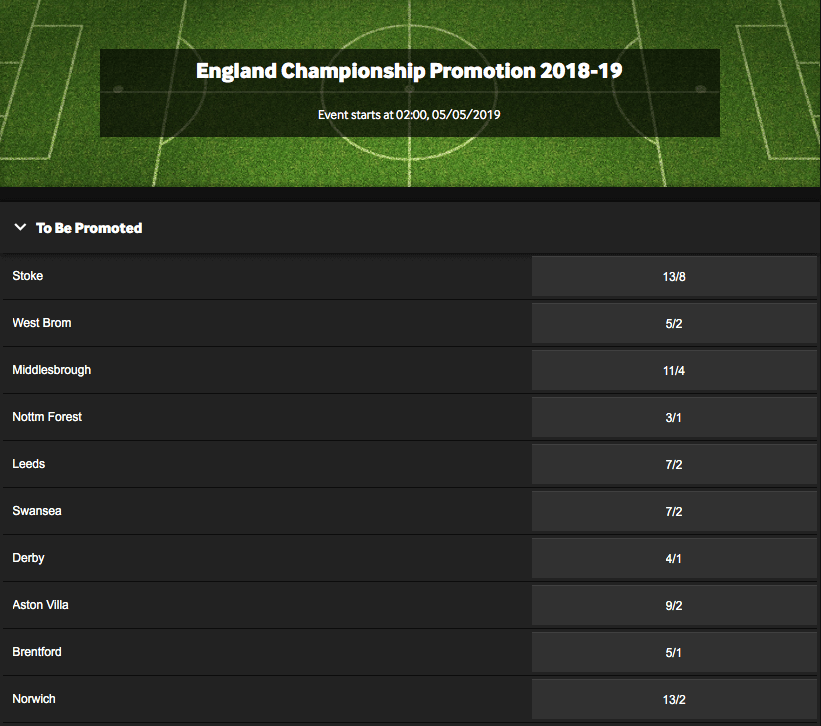 Having been promoted from League One last season, Rotherham United will be looking to put up a stronger fight than their last Championship campaign, however it remains to be seen as to whether they have the firepower to deliver on a weekly basis at this level. Elsewhere, the likes of Birmingham City and Bolton Wanderers were perhaps lucky to avoid the drop last season, meaning that it comes as little surprise that they are among the relegation favourites once again. 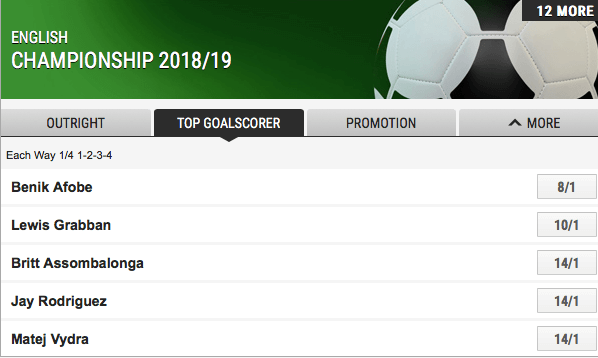 The two favourites for the golden boot award have both joined new teams over the summer, with Benik Afobe set to line up for Gary Rowett’s Stoke City, while Lewis Grabban should feature heavily for big-spending Nottingham Forest. Elsewhere, should he stay injury free, former Bristol City frontman Jonathan Kodjia should find the back of the net for Aston Villa on a regular basis.

Our Betting Forecast for 18/19 Championship Season

The Championship is a notoriously difficult league to predict, with any team having the ability to defeat anyone on their day. However, there are undoubtedly some standout names to look out for over the next 10 month, including the recently relegated Stoke City and West Bromwich Albion, who look well set up to push for an automatic return to the Premier League. Meanwhile, a whole host of teams will be eyeing promotion via the playoffs, with the likes of Middlesbrough and Aston Villa having reached this stage of the competition last season, with the latter losing in the final at Wembley Stadium. As far as relegation goes, Rotherham United already look like being a prime candidate, despite having brought in some good players in the transfer market. The Yorkshire side could well be joined by clubs including Wigan Athletic and Bolton Wanderers in the battle to avoid the drop.