The Diamond Jubilee Stakes (Saturday 23 June) was first run in 1868, though it didn’t take its present name until 2012 when it was used to commemorate the Queen’s Diamond Jubilee. It is currently a Group 1 Race run over six-furlongs and is open to any horse aged four or older. It used to be open to three-year-olds, but they can now run in the Commonwealth Cup a day earlier. Famous winners of the Diamond Jubilee Stakes include Danehill, Owington, Royal Applause, Choisir, Black Caviar, Twilight Son, and The Tin Man. 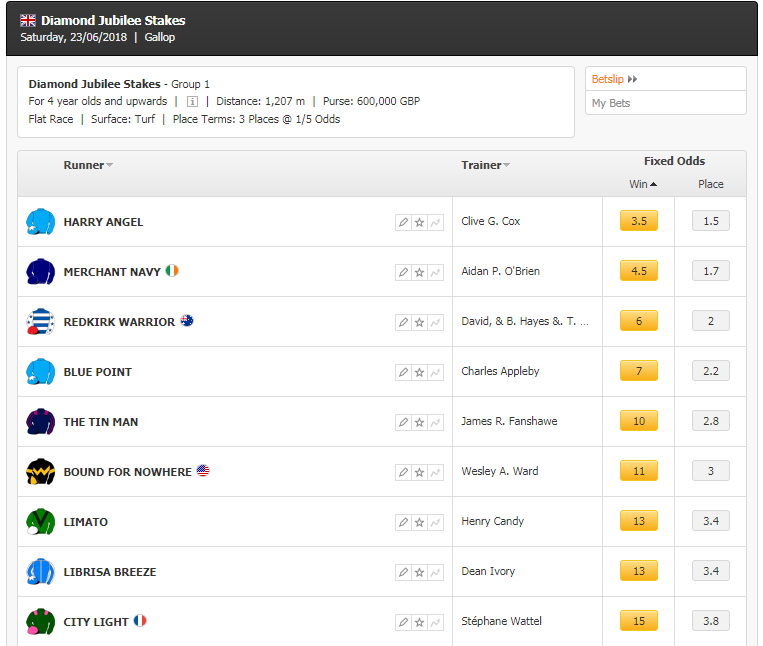 On a mark of 125, Harry Angel is rated 6lb+ higher than his rivals here. However, the reason why he’s not shorter in the betting is he has yet to win at Ascot in four visits, whilst he’s won all his other starts. However, he was second to Caravaggio in last year’s Commonwealth Cup and the third Blue Point boosted that form with a win in Tuesday’s King’s Stand Stakes.

Former high-class Aussie sprinter that has been transferred to Aidan O’Brien so he can have a crack at some of England’s top sprints. Drifted in the market before making a winning debut for O’Brien, which has to be a good sign. However, he was beaten by Redkirk Warrior in Australia in March, when receiving 12lb from that rival and he has to race off level-weights here.

Formerly a decent 10-furlongs horse that was trained in Britain by William Haggas. He was then sent to race in Hong Kong. Has since been transferred to Australia where he has been turned into a sprinter by his new trainer, and a very good one on the form of his two runs this season. Aussie horse also have a good record in the race in recent seasons.

Very capable sprinter who won last year’s renewal for James Fanshawe and Tom Queally and looks primed for a repeat after winning a Listed Race at Windsor last time. The form of that win was also boosted by the runner-up D’Bai next time. This does look a stronger renewal than last season but he has recorded three wins from six runs at Ascot and is likely to be on the premises at the end of the race.

American trained sprinter who finished fourth in last year’s Commonwealth Cup. However, he was over three-lengths behind Harry Angel that day. Been in good form this season but no reason why he should finish in front of Harry Angel.

A win for Harry Angel would come as no surprise considering his rating and overall level of form, but he does tend to find at least one too good for him here at Ascot. Therefore, an each-way bet on Redkirk Warrior could be the way to go as he’s looked strong at the finish in his races this year and he has plenty of stamina if Harry Angel starts to flounder near the end.