The Coronation Stakes (Friday 22 June) was first run in 1840. It is a Group 1 Race for fillies that are three-year-olds and is run over a mile. It is often contested by fillies that have won or run in one of the various 1,000 Guineas races run in England, France, and Ireland. Meanwhile, it’s role of honour is littered with high-class fillies, including Kooyonga, Marling, Banks Hill, Attraction, and last year’s winner Winter. 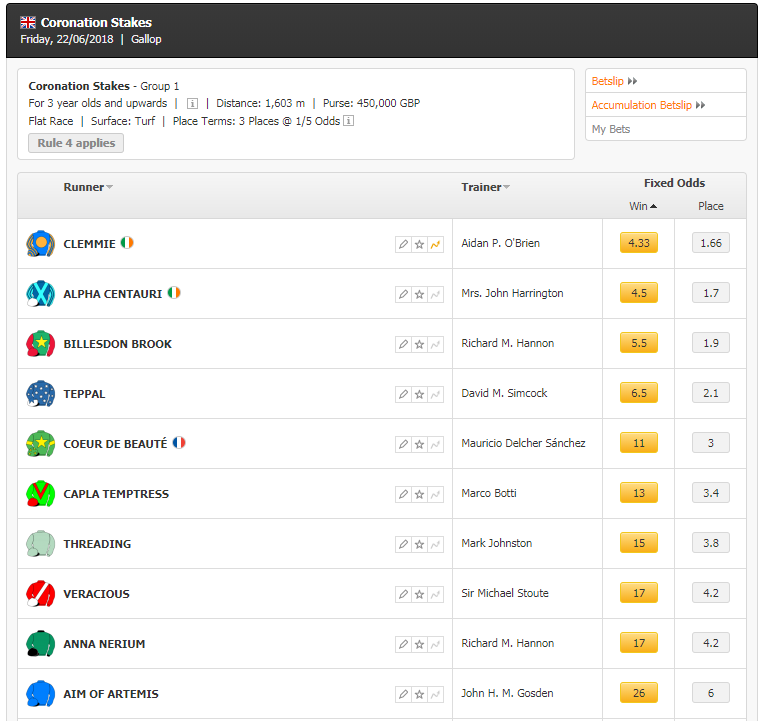 Trained by Aidan O’Brien and was thought to be one of his best two-year-old fillies last season when she won four group races including a Group 1. She was beaten at Ascot on her only visit though. She also didn’t run well in this season’s Irish 1,000 Guineas however, as that was her first run of the season, she could take a step forward here.

Was highly-regarded at the start of her two-year-old career and was sent-off a 2/1 favourite to win at last year’s Royal Ascot Meeting. She was just beaten by the useful Different League that day but flopped on her final two starts of that season. However, she bounced back in terrific style to win this season’s Irish 1,000 Guineas, finishing over seven-lengths in front of Clemmie.

Taking winner of this season’s English 1,000 Guineas, despite her 66/1 odds. Many may choose to put that improved performance down as a fluke but the form has been upheld in some style by the runner-up Laurens who has won two Group 1’s since. The worry is she has to run around a bend here so may not get into top-gear quick enough.

Unbeaten in two starts as a two-year-old and she impressed when winning the French 1,000 Guineas on this season’s seasonal debut. Despite that win, she remains one of the least unexposed runners in the field, and Without Parole managed to maintain his unbeaten record in the St James’s Palace Stakes last time. Her win in France also showed that racing around a bend holds no fears for her.

The 2018 Coronation Stakes brings together the winners of three of this year’s classics and it will be interesting to see which one of Alpha Centauri, Billesdon Brook, and Teppal comes out on top. Billesdon Brook has the best form so far but, just like Alpha Centauri, her biggest win came on a straight course. Therefore, it could be worth siding with the less exposed Tepal who looked very much at home racing round a bend in the French 1,000 Guineas. Coronation Stakes 2018 Tip: Teppal