The Commonwealth Cup (Friday 22 June) is a Group 1 Race for three-year-olds that is run over six-furlongs. It was only introduced into the Royal Ascot program in 2015, as three-year-olds had previously contested the Diamond Jubilee Stakes. The race proved an instant success though as the inaugural winner Muhaarar went on to be champion sprinter in 2015. The 2016 winner Quiet Reflection then went on to win Haydock’s Group 1 Sprint Cup, whilst last year’s runner-up Harry Angel went on to also be crowned champion sprinter. 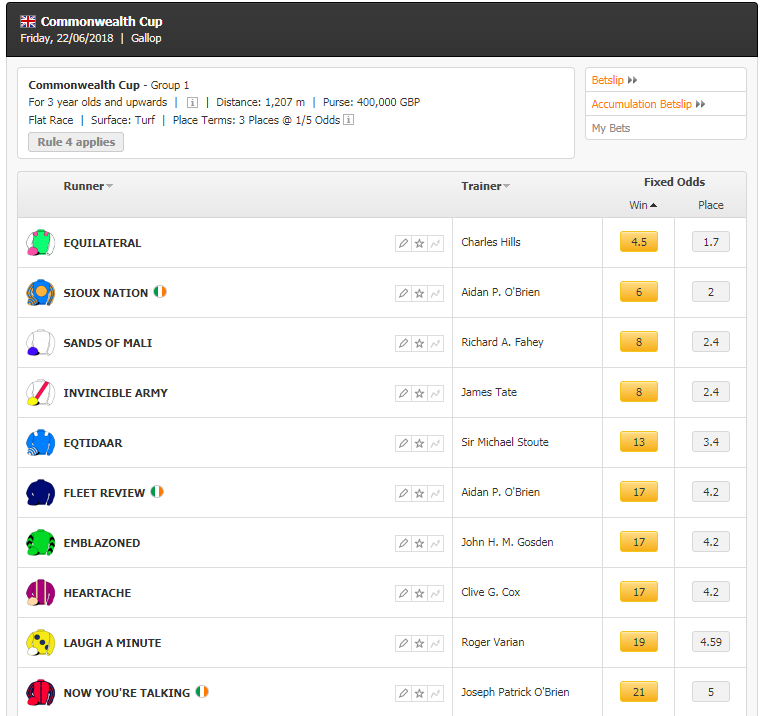 One of the least exposed runners in this year’s field and his rating of 105 requires him to take a big step forward with the top-rated horses rated 116. However, he was so impressive when winning on his seasonal debut that it’s easy to see him taking another huge step forward here. He strode clear of some useful handicappers by 8-lengths with the minimum of fuss that day, very much in the style of a top-class sprinter. His trainer Charlie Hills certainly knows one of those when he sees one as he’s trained both Muhaarar and Battaash in the last three years. They also both improved dramatically as three-year-olds.

Well-backed winner of last season’s Norfolk Stakes at RoyalAscot and showed enough pace that day to suggest he could make up into a top-class sprinter this season. The form of his races hasn’t worked out that strongly though so he still has something to prove for last year’s winning trainer Aidan O’Brien. His sire Scat Daddy does have an excellent record at Royal Ascot though.

Has a tendency to win or run poorly but the best of his form gives him a leading chance. He’s already a Group 3 and a Group 2 winner this season and he’s beaten Invincible Army twice already. However, the margin was greatly reduced on the second of those occasions and there should not be much between them here.

His trainer has stated that he thinks he’ll be at his best as a four-year-old and the way he’s improved from run to run certainly suggests he could be. However, he has plenty going for him here after producing one of his best displays over course and distance earlier in the season.

There should be little between Sands Of Mali and Invincible Army but both are potentially vulnerable if there is a genuine Group 1 performer in this large field. The same comment also applies to Sioux Nation who will have been primed for this meeting. The three of them are drawn close together in stalls 22, 16 and 15. That could mean that Equilateral could be at a disadvantage in stall 2 but, if not, he’s taken prove himself out of the top-drawer. Commonwealth Cup 2018 Tip: Equilateral