The second Group C match at this summer’s Women’s World Cup will see former runner’s up Brazil take on debutants Jamaica in Grenoble. The South American giants are perhaps not the force in which they once were, however they are still expected to make it to the knockout stage of the competition in France, while Jamaica are something of an unknown quantity going into the tournament.

Brazil will be looking to get their 2019 Women’s World Cup campaign off to a winning start when they take on Jamaica at the Stade des Alpes, with the 2007 runners-up also hoping to make up for their disappointing showing in Canada four years ago.

Vadão’s side still have enormous talent in their squad, however it remains to be seen as to whether they can hit top form in France over the coming weeks. As for Jamaica, the fact that the majority of their players are relatively unknown may allow them to cause an upset against their more successful opponents. A large number of bets are expected to be placed on the match, so let’s take a closer look at the two teams, including their player availability and recent form, starting with Brazil.

Brazil qualified for the Finals after winning the 2018 Copa América Femenina, however the Female Canaries come into the tournament in a poor run of form. In fact, Vadão’s side has not lost their nine matches in all competitions, a run which includes recent defeats against European duo Spain and Scotland. Brazil were knockout out at the Round of 16 stage by Australia four years ago, with many of their current playing squad coming into the latter stages of their careers.

Perhaps none more famously so than Marta, with the 33-year-old currently preparing for her fourth World Cup appearance. The former World Player of the Year winner has scored a massive 110 goals from just 133 international caps, with the Orlando Pride forward still having the talent to cause any defender problems. 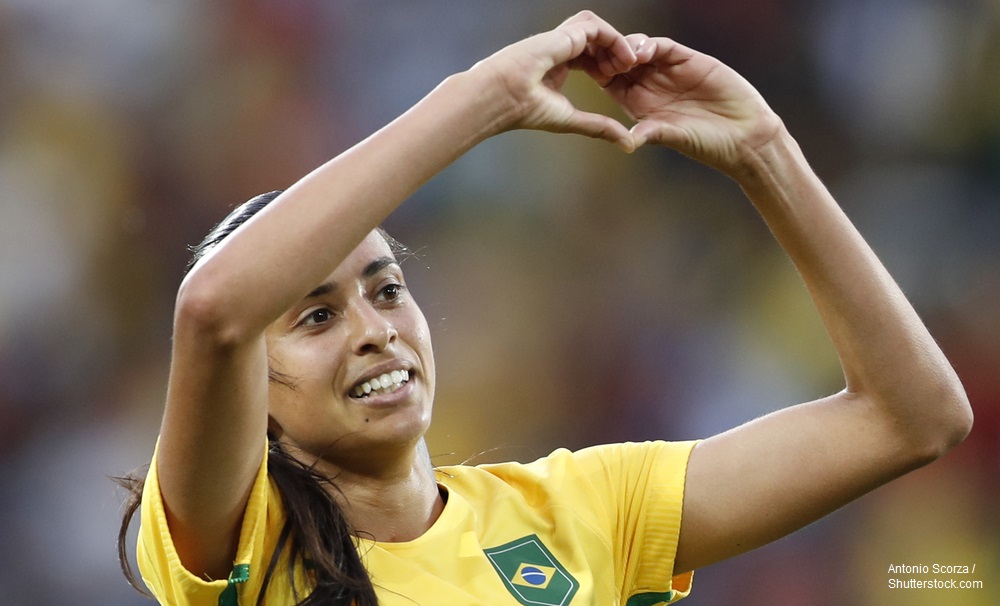 Elsewhere, 41-year-old midfielder Formiga could become the oldest player in the tournament, while Barcelona striker Andressa Alves is another major asset for the South American’s ahead of kick-off against Jamaica. Head Coach Vadão is set to name an extremely attacking starting eleven against Jamaica, having only named four midfielders within his squad.

Jamaica boss Hue Menzies led his side to their first ever World Cup Finals after finishing third at the 2018 CONCACAF Women’s Championship, with the Reggae Girlz coming into the tournament off the back of a five-match unbeaten run. This run includes victories over the likes of Panama and Chile, however it remains to be seen as to how they will fare against the skill and experience of a side like Brazil. 22-year-old striker Khadija Shaw could well be one of the surprise packages of the tournament, having scored a massive 15 goals during qualification.

Elsewhere, 21-year-old Captain Konya Plummer is an imposing figure at the centre of defence for Jamaica, with the UCF Knights player needing to be on form if they are to have any chance against Brazil. The Reggae Girlz were beaten 6-0 by the United States in the final of the CONCACAF semi-finals at the end of 2018.

Brazil vs Jamaica Head to Head

The two teams have met just once in the past, coming during the 2007 Pan American Games, when Brazil ran out comfortably 5-0 winners. Whilst a similar scoreline in France would not come as a surprise, the fact that the duo have not met in over ten years means that little can be read into the head-to-head record between Brazil and Jamaica. As a result, factors such as form and player availability will have more of an impact upon the result in Group C.

Given their excellent history in the women’s game and their ability to score a goal from anywhere on the pitch, it comes as little surprise that it is Brazil who are the firm favourites for victory when they take on World Cup debutants Jamaica.

Brazil can be backed for the three points at best odds of 1/25 with bookmaker BetVictor, whilst those looking those looking to back a surprise success for Jamaica can take advantage of an appealing price of 45/1 on the same platform. Meanwhile, a draw is also worth considering, with this market coming with best odds of 14/1 at Betway ahead of kick-off.

Having taken all of the relevant information and statistics into account, our top betting tip for the Women’s World Cup Group C clash between Brazil and Jamaica is to bet on the second half to be the half with the most goals, a market which is available at odds of 10/11 with Betway.