The greatest show on earth is about to embark on its 21st journey from this June 14th, 2018. The biggest sports event of the year is about to raise its curtains in Russia. With the enjoyment of games comes another type of fun activity – betting. Who’s going to take the trophy home this year? This is an analysis of all the 64 matches to give you an idea who to put your money on.

It’s important to know the World Cup works if this will be your first time as a bettor. A total of 32 countries go selected to battle it out on the field. These 32 countries are divided equally into 8 groups. Within the same group, each team faces each member of the group.

Now that you know the basics, let’s talk about the group-wise analysis. Each group will consist of 2 winners to qualify to the next round, and the betting game will only get more fun and exciting from here. 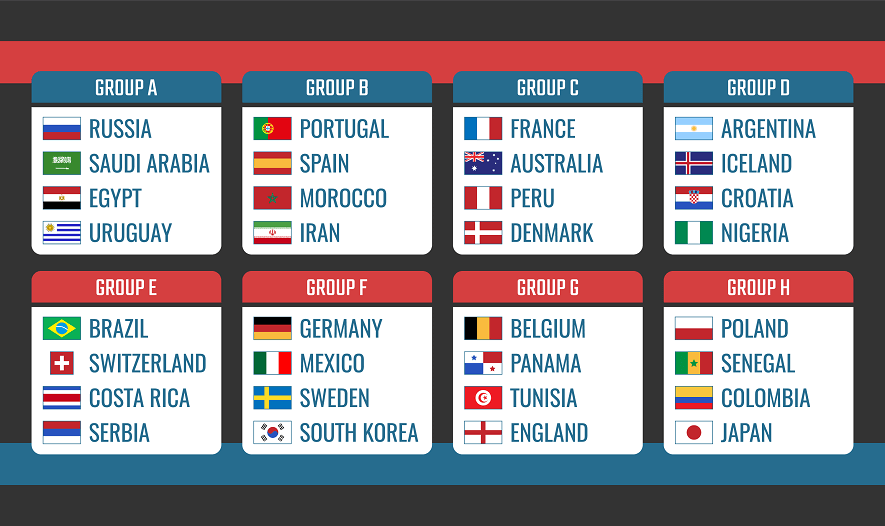 Driven by the mass audience to cheer host country Russia on the field, they have a good head start on the game already. But the Uruguayans are still more likely to be a fan favorite over Russia. We can’t really write off Egypt when they have Mohamed Salah to fight for that 2nd place to qualify. Saudi Arabia will have it hard to qualify for the next round due to the other 3 team’s strength.

Uruguay should be at no. 1 with Suarez and Cayani. Egyptians are not very far behind as they have shown amazing growth. Russia will feel both the advantage and pressure of being the host. Uruguay wins our vote to bet on as the topper of this group.

This is one of the toughest combinations of the competition. Spain is a favorite, being the champions of 2010. The European champion, Portugal, led by Cristiano Ronaldo is not far behind. Morocco and Iran are both qualified enough to make it to the 2nd round as well.

Odds are in favor of Spain and Portugal, thanks to the arsenal of Sergio Ramos and Ronaldo. Our tip is to bet on Spain as the no. 1 in this group.

This group is going to be one of most watched ones this competition. With finalist of the last Euro and players like Paul Pogba, Antoine Griezmann, and Kylian Mbappé, this group is definitely a good one to keep a tab on. Denmark has Christian Eriksen who showed skills in the qualifier. Australia and Peru will have a hard time to qualify.

The odds can go both ways for both France and Denmark, but we’ll bet on France. We’ll not place any bets on Peru and Australia though.

Argentina is a clear fan favorite for this one, even though they struggled to make it to the World Cup. Messi and the team have to work a lot to make it happen this time. Surprise of the last Euro, Iceland will be a good one to keep a tab on. Croatia and Nigeria will have to up their games if they want to qualify.

Argentina will finish at the top of the group, but the next spots are hard to choose before the competition starts. This group will be interesting to follow because of the other 3 teams.

Hands down, our money is on Brazil. The other 3 teams will have to fight for the 2nd place, but our betting will be more towards Switzerland and Costa Rica.

The 2nd spot holder can be any one of the 3 teams other than Brazil. Switzerland has a great range of players, but anything can happen due to goal average. When teams get equal points, it’ll come down to the difference of goals.

The residing champion, Germany, is definitely at the top of the fan favorites list. Many are speculating for the 2nd win in a row. With Low’s guidance, Germany will be hard to beat in the group stage. The 2nd spot is where it gets hard. With Mexico’s offense and Sweden’s defense, it can get both ways. South Korea might turn out to be the element of surprise.

The wisest plan will be to bet on Germany. The other 3 teams are too close by to make a bet before the start of the competition.

Belgium and England are most likely to qualify from here. The Belgians and English will be hard to knock down with players like Hazard, Lukaku, Kane, Ali, Dier. Talent is apparent on the Tunisian side, but it’ll be hard to get past the other 2 groups. Panama is lacking on all fronts to make it to the 3rd spot.

Belgium and England will make it for sure, but in which spot, that’s yet to be seen. We’ll, however, like to place our bets on the Belgians for their individual talents.

The teams are on a similar level, which makes it hard to predict. All the teams have an equal level of flair and talent to make it to the 2nd round.

Senegal is one to watch, as they were impressive in the qualifiers. Not to mention their quarter-finals spot in 2002. But again, this is a tough group to crack as anything can happen.

So Who Are The Favorites?

The bettors are favoring the 4 teams – Germany, Brazil, France and Spain – as the top favorites.

Being in a relatively easier group, the Germans should be at the top spot there. So they’ll be against Serbia or Switzerland, where winning should be easy again. The players to watch are Timo Werner, Thomas Müller, and Manuel Neuer.

The 2nd favorites have shown immense charisma in the qualifiers to have a run for the trophy. They’ll face either Mexico or Sweden if they make it no.1 in the 1st stage, not very easy opponents by any means. But with players like Neymar, Luiz, Coutinho, Jesus, and Thiago, our money will be in Brazil.

France – Stronger Than Ever?

After showing skills in both Euro and the qualifiers, the French are here to win. The talented pool of Pogba, Martal, Kante, Varane, Lloris, Griezmann, Mbappé is looking strong. The first stage should be easy to overcome as well.

Spain – Still Have It?

After the disappointment of 2014’s World Cup and 2016’ Euro, Spain managed to impress us in the qualifiers of this Cup. If they come out as No. 1 in the initial stage, they’ll face either Russia or Egypt, which are both within reach.

The individual’s talent comes after the team’s advancement. Despite being a good player, the team’s failure will mean the same for the player. It’s up to decide who to bet on, but remember to take note of the team’s strength as well. For example, Lewandowski might be looking better than Timo, but Germany looks better than Poland, so avoid that bet. Neymar and Messi both are ranking good as of now.

Betting on the World Cup 2018 will become tougher and tougher as the game progresses, but that’s the fun part of it. Based on your judgment and past games’ analysis, you can make a good bet.