The new Premier League season is now just a week away with Manchester United and Leicester City being involved in the curtain raiser next Friday night. There has been plenty of talk this summer about who will be challenging and which teams need to buy what players, but I’m sure that most of the managers will be happy when the season finally gets underway next week.

Ahead of the new season, William Hill have a great offer for new and existing customers to take advantage of. They are offering you the chance to get a free £5 bet every time the player you choose to be top scorer in the Premier League scores in the month of August. To take advantage of this offer, all you need to do is place a £20 single bet, or a £10 each way bet on a player to be top scorer in the Premier League and then William Hill will do the rest. 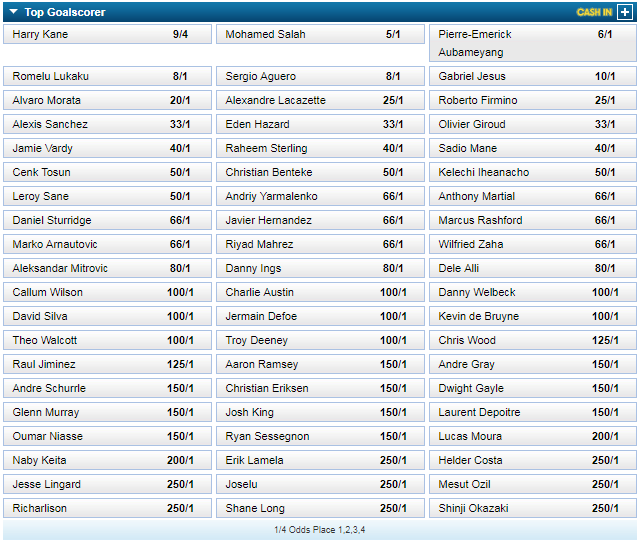 The question is, who should you choose though? In my opinion, the man for this offer is definitely Mohamed Salah. The Liverpool forward finished last season as the top scorer in the league and even though he was not fully fit at the World Cup, he still managed to grab himself two goals in two games. Salah also has a big advantage over a number of his competitors due to the fact he’s had a full pre-season.

Another thing to consider with this offer is the fixture list facing Salah; Liverpool are taking on West Ham United, Crystal Palace and Brighton & Hove Albion in August. That is a fairly favourable set of matches, especially when you compare it to Arsenal who are facing Manchester City and Chelsea in August. Those fixtures for Arsenal basically rule Alexandre Lacazette and Pierre-Emerick Aubameyang out of this offer for me. That fixture against Arsenal also rules Sergio Aguero and Gabriel Jesus out of this offer, as well as the fact that Pep Guardiola likes to rotate his two strikers.

The other thing to look at is World Cup participation. Harry Kane and Romelu Lukaku have both only just joined up with their teams after a busy World Cup campaign and they may well be used sparingly at the start of the season. Kane has also never scored a goal in August, so that should rule him out of the offer for you too.

Claim the offer now at William Hill
New William Hill online customers only. Min. unit stake of £10/€10 at odds of 1/2 or greater. Only the “win” part from EW bets will count. Free bet terms, payment method & country restrictions apply. Free bets credited as 3 x £10/€10. Free bet stakes are not returned as part of the settlement of successful free bets. All Free Bets must be wagered within 30 days.