The Open is golf’s third major of the season, but arguably the most prestigious. It gets underway tomorrow at Royal Birkdale, and the oldest major’s 146th staging promises to keep all golf fans hooked from the first tee shot to the final putt.

As the tournament is hosted by a number of different courses, and the good old British weather plays its part, The Open is always a fascinating spectacle and one of the most coveted trophies among the players themselves.

Last year, we were treated to an epic final-day duel between Phil Mickelson and Henrik Stenson, and the Swede came out on top, finishing with a record score of -20. But what can we expect this year?

Gone are the days when Tiger Woods dominated the game and any major he didn’t win was a surprise. The last seven majors have been won by first-time winners which proves that this tournament is wide open and the game is throwing up plenty of surprises.

In terms of players coming into the tournament in good form, the obvious ones to watch are England’s Tommy Fleetwood and Spanish pair Jon Rahm and Rafael Cabrera-Bello. Fleetwood has been a revelation this season, and a fine win at the French Open followed an earlier victory in Abu Dhabi. He is available at 25/1 with William Hill.

Rahm won the Irish Open two weeks ago and is rapidly becoming one of the game’s rising stars, as his price of 16/1 would indicate. Along with Rickie Fowler, he is the best-priced player in the field never to have won a major. However, Cabrera-Bello won the Scottish Open last week, the traditional warm-up event yet is an unfancied outsider – largely because no player has ever done the double.

The last time The Open was held at Royal Birkdale in 2008, conditions were difficult and Padraig Harrington retained his title with a brilliant final-day performance. Henrik Stenson was tied third while Greg Norman, Jim Furyk and Ben Curtis featured prominently, showing that experience is important – although then-amateur Chris Wood finished fifth. Expect a little bit of everything and don’t be surprised if the winner is not among the very early leaders.

The Open is always played on a links course, which presents a different set of challenges to golfers that are used to wide open fairways, fast greens and gentle weather conditions. Driving the ball a long way will always help, but good course management and your ability to get yourself out of trouble will be as important. Some players just don’t play well when the weather turns, and they will struggle. It is why I prefer to favour European players, particularly those with good driving accuracy and experience in windy conditions.

Making the transition to links golf has sometimes been difficult for players on the PGA tour, which is why many of them will play in the Scottish Open beforehand. As with any tournament, the winning player will need a bit of luck along the way, and that can sometimes come with a favourable break in the weather.

You need to think about this with your betting. Instead of just blindly backing the players you want to win, have a look and see when they are due to tee off. The Open tee times are available here. If all of your picks are playing at roughly the same time, and heavy rain arrives but clears up later, they will be at a significant disadvantage. Rain is forecast for both Friday and Saturday.

Because golf is largely unpredictable, picking the outright winner is far from easy. Even bookmakers recognise this and Sky Bet will offer up to 10 places for an each-way bet. So, if one of your players finishes in 10th you could still be in line for a return if you fancy his chances. 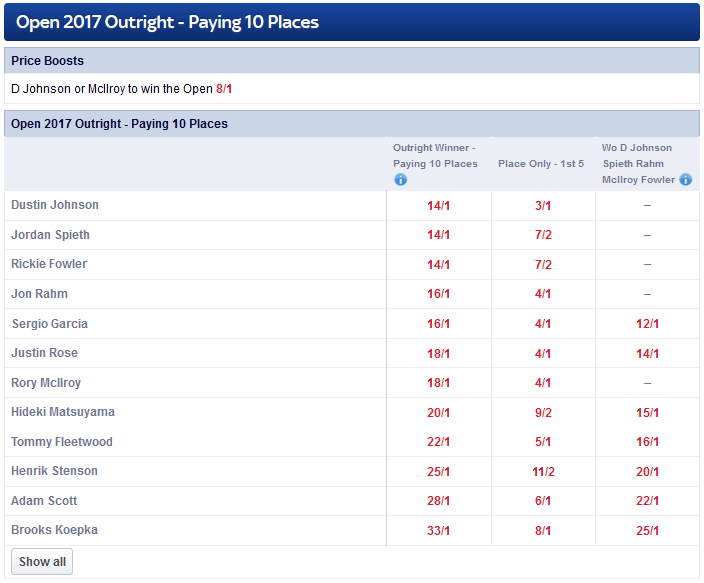 I recommend you choose a selection of golfers: some in-form favoured players, some outsiders, and some experienced players who know how to navigate their way through a major weekend. Try to pick some starting early and some late to minimise the effect bad weather can have. Here are my picks, with half an eye on cashing out if they have a good round or two and other more favoured players struggle.

Among the early starters in the first round (and therefore a late starter in the second), Justin Rose (22/1 with Betfred) can usually be expected to perform well. The Olympic champion was runner-up in the US Masters to Sergio Garcia, made waves as an amateur at The Open here in 1998 and was sixth two years ago. Soren Kjeldsen (150/1 with Ladbrokes) is another player in good form with a track record of performing well when weather conditions aren’t great.

Later starters to watch include Cabrera-Bello (70/1 with Betfred), who will be keen to pick up where he left off in Scotland and Lee Westwood (80/1 with Coral and others). Although doubts remain over his ability to get over the line in a major championship, he has a recent track record of staying with the leaders for most of the way and has five top-10 finishes at The Open to his name.

Fleetwood (25/1 with William Hill) has been well hyped going into this tournament and if he handles the pressure of playing in front of his home crowd, could be a contender while Rahm (18/1 with Paddy Power) is in a similar position. This is a major at which is now expected to perform well and playing alongside Westwood could help him. Another Englishman enjoying a good season is the consistent Paul Casey (40/1 with Ladbrokes). He finished in the top 10 at the Masters and was tied seventh at Royal Birkdale last time around.

Talking of players in form, Bryson DeChambeau won the John Deere Classic last weekend in the US, and is the obvious favourite in bet365’s Top Debutant market, where he is available at 6/1.