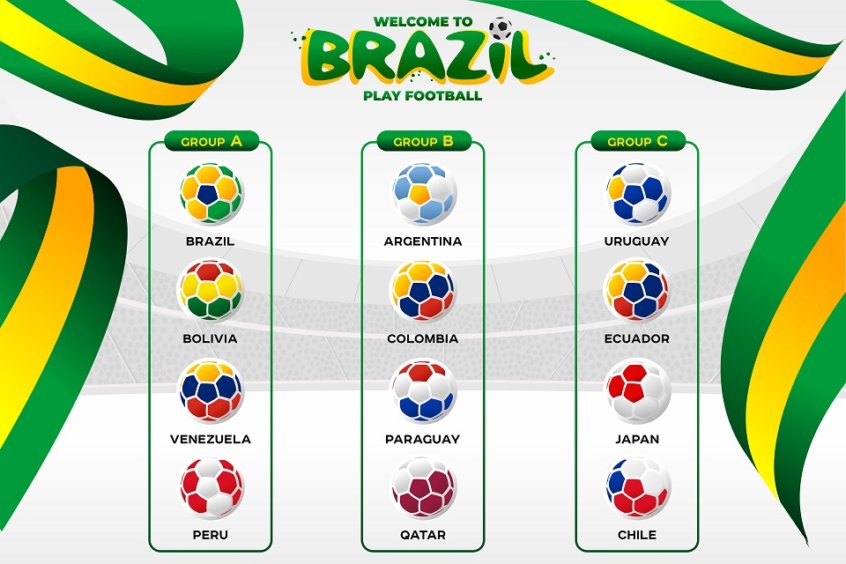 The 46th edition of the Copa America will take place in Brazil and five cities will host the tournament: Salvador, Rio de Janeiro, Sao Paulo, Belo Horizonte, and Porto Alegre. It will be the final edition played on odd years and with 12 national teams. They are drawn into three groups of four and for the first time since 1993, Copa America will be without CONCACAF teams. However, Japan and 2019 Asian Cup Winners, Qatar, got an invitation to participate, which will be Qatar’s first appearance in the tournament.

Uruguay are the record holders with 15 Copa America trophies (the previous one in 2011); Argentina have 14 wins while the host nation Brazil have eight titles. Chile, who won the last two editions in 2015 and 2016, have two titles, same as Paraguay and Peru while Colombia and Bolivia have one Copa America trophy apiece. 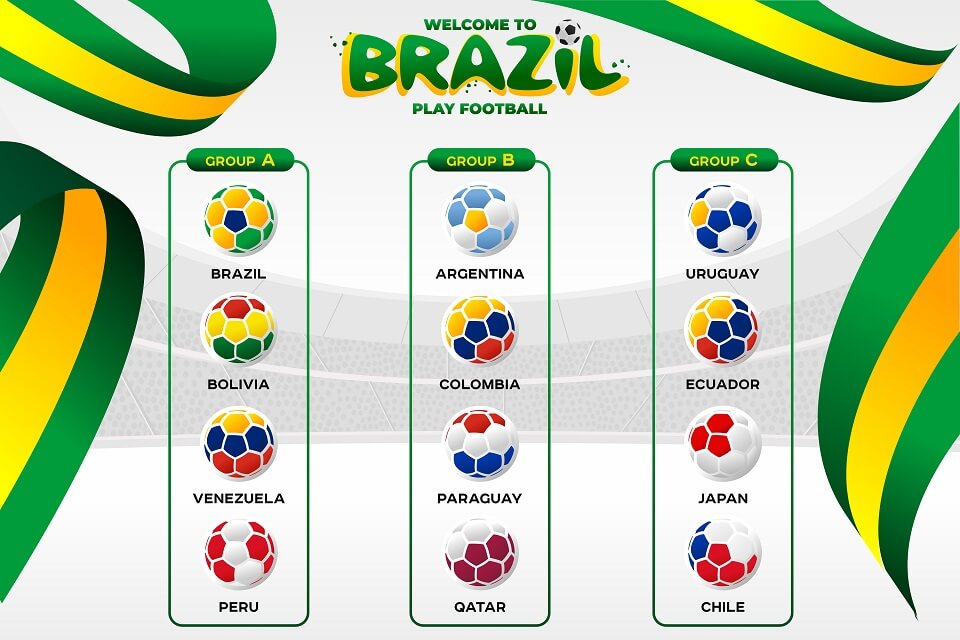 Two teams from each group will advance to the quarter-finals while two best third-placed teams will also find a place in the last eight.

The host nation Brazil are the biggest favourites to lift their ninth trophy at 11/10 odds, Argentina have the second-best chance to win at 15/4 while Uruguay are 7/1 to win the Copa America for the 16th time. Colombia are given 9/1 chances to win, Chile are currently at 12/1 while the odds on Peru are at 25/1. The debutants, Qatar, are 100/1 to win Copa America and are the biggest underdogs in the tournament.

Brazil have not won a major trophy since 2007 when they won Copa America and after failure at 2014 World Cup and 2018 World Cup, the pressure is mounting on Samba Boys to finally end the drought. They have a pretty talented side but will be without biggest star Neymar who suffered another ankle injury in international friendly against Qatar and will miss up to four weeks. Philippe Coutinho, Roberto Firmino, Gabriel Jesus, David Neres, and Richarlison will have to step up in Neymar’s absence and lead Brazil’s attack. Even without Neymar, the Brazilians are still the biggest favourites to win here.

Bolivia haven`t won the Copa America since 1963 and they never reached semi-finals since. Marcelo Martins Moreno is the team’s leader and former Shakhtar Donetsk and Gremio striker is currently playing in China for Shijiazhuang Ever Bright. He is also the nation’s top scorer at the moment with 17 goals, more than all of his teammates combined (11).

Venezuela have a rather experienced squad, led by captain Tomas Rincon and Newcastle United striker Solomon Rondon, who became the team’s top scorer with his 24th goal in a friendly against the USA. Rondon played very well for the Magpies in the Premier League last season, scoring 11 goals in 32 appearances and will pose the biggest threat to opposing goalkeepers.

Peru are waiting for the Copa America title since 1975  and following unsuccessful 2018 World Cup where they failed to progress beyond the group stage, Los Incas will try to at least reach quarter-finals here.  Paolo Guerrero and Jefferson Farfan are leaders of this generation and they have 61 goals between them while Santos midfielder Christian Cueva is the most influential player in the middle of the park.

Argentina have reached the last two Copa America Finals and lost both on penalties, each time. They are without a major trophy since 1993 and people in Argentina are quite anxious to finally see Lionel Messi win something with the national team. This could be one of the last chances for Messi to win a trophy with Argentina as he will be 34 at 2022 World Cup in Qatar. Sergio Aguero and Paulo Dybala will play alongside Messi in the attack but midfield and defence are problematic for head coach Lionel Scaloni as plenty of players don’t have more than 20 international caps and are inexperienced.

Colombia are considered as the dark horse of this Copa America and one of the candidates to take down Brazil. They were third in 2016 and now will be looking to get to the final with such stars as Radamel Falcao, James Rodriguez, Juan Cuadrado, Duvan Zapata, and Davinson Sanchez. Midfield is considerably experienced comparing it to Argentina’s while the defence seems to be the strongest part of the squad with stars like Yerry Mina, Cristian Zapata, Santiago Arias, and aforementioned Davinson Sanchez.

Paraguay’s second and last Copa America win was in 1979 and since then, they managed to reach finals once but Uruguay were a better side in 2011. They have no world-class players in the squad but rivals should pay special attention to Newcastle United midfielder Miguel Almiron who has the ability to make something out of nothing and 36-year-old striker Oscar Cardozo, who is the team’s top scorer with 11 goals.

Qatar football has been on the rise in the last few years and although we don’t know much about them, the Maroons won their first major trophy with a win at 2019 Asian Cup, which was a big surprise. They play attractive, eye-catching football and even though they are massive underdogs here, don’t be surprised if they somehow reach the knockout phase.

Title-holders Chile are looking to get their third consecutive Copa America trophy after winning the competition in 2015 and 2016. The Chileans have the most experienced side at the tournament and even six players with over 100 caps but the nation expects star Alexis Sanchez to rekindle his form following a disastrous season at Manchester United. Arturo Vidal, Charles Aranguiz, Eduardo Vargas, Gary Medel, and Mauricio Isla will try to help Alexis in that intent.

Japan are facing a tough task to advance to the quarter-finals but after failing to win the 2019 Asian Cup, where they were the biggest favourites, they will have to play their best game here. They didn’t get past the group stage in their only appearance at Copa America in 1999 and it will be extremely hard to do it this time around, considering that they decided to take a lot of young, inexperienced players to Brazil. Even 16 of 23 players didn’t play a single match for the country and Leicester City forward Shinji Okazaki is the only star in the squad.

Uruguay have excellent attack led by Luis Suarez and Edinson Cavani and phenomenal defence led by Diego Godin and Jose Gimenez. Midfield is not as flashy but with such players like Lucas Torreira, Matías Vecino, and Rodrigo Bentancur, La Celeste has the strength to go all the way in Brazil. Uruguay won their last Copa America title in 2011 and this could be one of the last chances for ageing stars Suarez, Cavani, and Godin to do it again.

Ecuador never reached final at Copa America and with the strength of the current squad, it is hard to expect them to even go through the group stage. Antonio Valencia and Enner Valencia will try to take their team forward but with fierce competition in Chile and Uruguay, their best chance is to be among two best third-placed teams.